Congratulations to Nicole LInaksita winner and scholarship recipient of the Intermediate Canadian Piano and runner-up in the Intermediate Piano at the Performing Arts BC 2009 competition held this year in Prince Rupert. 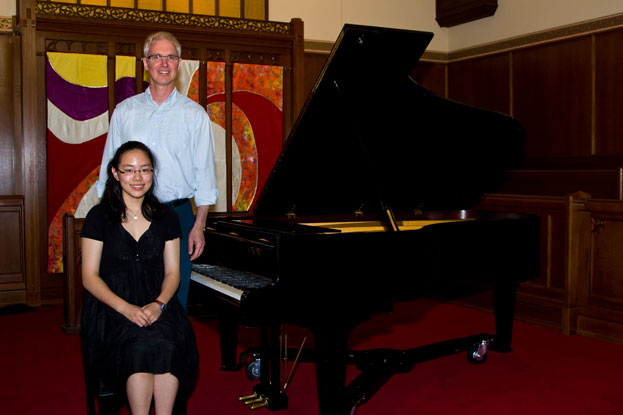 Nicole represented the Vancouver Kiwanis Festival in this Provincial Festival and performed Sonata Op. 10, No.3 (Beethoven), Scherzo No. 4 in E Major (Chopin) and Image Astrale (Jean Coulthard). She also recently earned First-Class Honours with Distinction on the Performer’s ARCT Piano.

Established in 1964, Performing Arts BC (formerly the BC Association of Performing Arts Festivals), is a not-for-profit charity which acts as the umbrella organization for 34 regional performing arts festivals throughout the province. These festivals are as diverse in size and scope as the communities they represent. Over 33,000 young musicians, dancers and dramatic artists, ranging in age from 5 to 28, participate each year in one of these regional festivals. The festival setting gives them an opportunity to gain invaluable educational and performing experience. The Provincial Festival, also known as The Provincials, is the eagerly anticipated pinnacle of BC's festival circuit. Hosted by a different regional festival each year, only the most promising young performers from each regional festival are recommended to the Provincial Festival where they compete and participate in adjudicated sessions, master classes, coaching, workshops and technique classes with some of North America's finest adjudicators. Classes are offered at the Provincial level in Classical Voice, Musical Theatre, Piano, Strings, Woodwinds, Brass, Guitar, Chamber Music, Speech Arts, Ballet, Modern Dance and Stage Dance. The very best performers in various music disciplines are then recommended to move on to the National Music Festival.