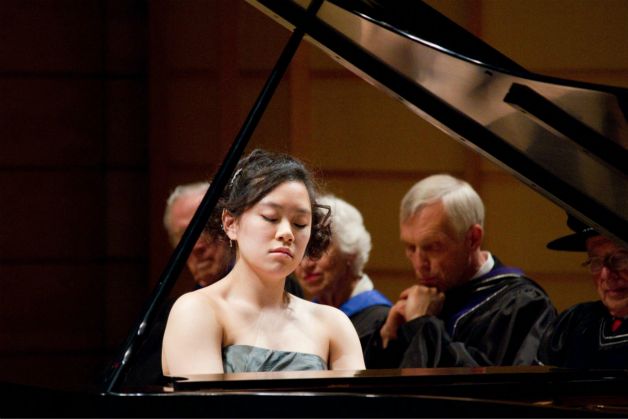 The Chan Centre for the Performing Arts

Nicole Linaksita is the recipient of the 2011 National Gold Medal for the Licentiate Diploma in Piano Performance (LRCM). Nicole’s performance of Beethoven’s Waldstein Sonata, Op. 53 and Chopin’s Piano Concerto No. 2, Op. 21 earned her the distinction of being the highest-ranking Licentiate graduate in Canada. Nicole completed the LRCM in June 2011 as a student of David Vandereyk and currently is in her first year of studies at the UBC School of Music majoring in Piano Performance.

The LRCM is the culmination of the RCM Examinations program. The examination is evaluated as a professional concert performance. Candidates are expected to demonstrate a masterful command of the instrument and communicate an understanding of stylistic characteristics and structural elements of each repertoire selection with interpretive insight and a mature musical personality. The RCM National Gold Medal is awarded to the candidate who receives the highest examination mark in the country.
© Copyright 2009 - 2023 David Vandereyk. All rights reserved.
Site by Vancouver Web Designer J. Klassen.